“Our hopelessness about a problem is a bigger problem than the problem. There are no hopeless circumstances, only hopeless people.” 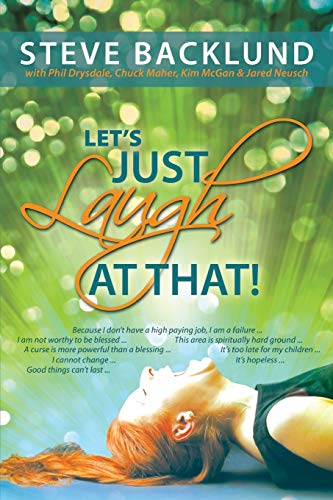 From the book "Let's just laugh at that"

A man fell into a pit and couldn’t get himself out. A Christian Scientist came along and said, “You only think that you are in a pit.” A Pharisee said, “Only bad people fall into a pit.” A compassion-less Fundamentalist said, “You deserve your pit.” A Charismatic said, “Just confess that you’re not in a pit.” A Methodist came by and said, “We brought you some food and clothing while you’re in the pit.” A Presbyterian said, “This was no accident, you know.” An Optimist said, “Things could be worse.” A pessimist said, “Things will get worse!” Jesus, seeing the man, took him by the hand and lifted him out of the pit.

An Arab chief told the story of a spy who was captured and then sentenced to death by a general in the Persian army. This general had the strange custom of giving condemned criminals a choice between the firing squad and the big, black door.

As the moment for execution drew near, the spy was brought to the Persian general, who asked the question, “What will it be: the firing squad or the big, black door?” The spy hesitated for a long time – It was a difficult decision – He chose the firing squad. Moments later shots rang out confirming his execution.

The general turned to his aide and said, “They always prefer the known way to the unknown. It is characteristic of people to be afraid of the undefined. Yet, we gave him a choice.” The aide said, “What lies beyond the big, black door?” “Freedom,” replied the general. “I’ve known only a few brave enough to take it.”

The following letter was found in a baking powder can wired to the handle of an old pump that offered the only hope of drinking water on a very long and seldom-used trail across the Amargosa Desert:

“This pump is all right as of June 1932. I put a new sucker washer into it and it ought to last five years. But the washer dries out and the pump has got to be primed. Under the white rock I buried a bottle of water, out of the sun and cork end up. There’s enough water in it to prime the pump, but not if you drink some first. Pour about one fourth and let her soak to wet the leather. Then pour in the rest medium fast and pump like crazy. You’ll git water. The well has never run dry. Have faith. When you git watered up, fill the bottle and put it back like you found it for the next feller.” – Desert Pete

“P.S. Don’t go drinking up the water first. Prime the pump with it and you’ll get all you can hold.”

If you were a lonely traveler shuffling down that parched desert trail with your canteen bone dry, would you trust this guy, Desert Pete? For all you know he is a lunatic. What if it a mad hoax? There are no guarantees to what he claims is true. And what would motivate you to prime the pump with the water in the bottle, perhaps the only water available. But you understand the fact that old pumps have to be primed. It’s a gamble. A risk. An adventure. What do you do?

If our greatest need had been information, God would have sent us an educator.

If our greatest need had been technology, God would have sent us a scientist.

If our greatest need had been money, God would have sent us an economist.

If our greatest need had been pleasure, God would have sent us an entertainer.

But our greatest need was forgiveness, so God sent us a Saviour.

We, then, following the holy Fathers, all with one consent, teach men to confess one and the same Son, our Lord Jesus Christ, the same perfect in Godhead and also perfect in manhood; truly God and truly man, of a reasonable [rational] soul and body; consubstantial [coessential] with the Father according to the Godhead, and consubstantial with as according to the Manhood; in all things like unto us, Without sin; begotten before all ages of the Father according to the Godhead, and in these latter days, for us and for our saivation, born of the Virgin Mary, the Mother of God, according to the Manhond; one and the same Christ, Son, Lord, Only- begotten, to be acknowledged   in two nature, inconfusably, unchangeably, indivisibly, inseparably; the distinction of natures being  by no means taken away by the union, but rather the property of each nature being preserved, and concurring in one Person and one Subsistence, not parted or divided into persons, but one and the same Son, and only begotten, God, the   Lord Jesus Christ, as the prophets from the beginning [have declared] concerning him, and the Lord Jesus Christ himself has taught us, and the Creed of the holy Fathers has been handed down to us.

When D. L. Moody, the famous American evangelist, was holding meetings in St. Louis in 1880, the Globe-Democrat announced that it would publish daily reports of his sermons. One night Moody preached on the conversion of the Philippian jailer, and the next morning the paper came out with the sensational headline, “How the Jailer Was Caught!” A copy of the paper fell into the hands of Valentine Burke, a notorious prisoner awaiting trial in the city jail. Burke thought he had once passed through a town called Philippi in Illinois and so was anxious to read of the fate of its jailer. When he realized that the GlobeDemocrat was reporting what had happened in ancient Macedonia, he was disgusted. But he could not shake off the text, “Believe on the Lord Jesus Christ, and thou shalt be saved.” God used it to convict him, and there in his cell, at midnight, he prayed for the first time in his life. The following Sunday he spoke with Christians who held services in the jail and was led into the light of the gospel. Burke was a changed man, and when he came to trial, the case against him was not pressed and he was released on a legal technicality. Later he became a sheriff’s deputy, and when the sheriff turned over to him his official photograph from the rogues’ gallery, Burke compared it with a recent one: “Notice the difference in the enclosed pictures. See what our holy religion can do for the chief of sinners” On the back of the old photograph he inscribed Psalm 113:7-8: “He raiseth up the poor out of the dust, and lifteth the needy out of the dunghill; that he may set him with the princes, even with the princes of his people.”

During 1977, millions of people lined up at museums across the United States to view the treasures from the tomb of King Tutankhamen of Egypt. It is interesting that Ali Hassan, the curator of the Egyptian Museum in Cairo, discovered that some of the jewels in the tomb were not genuine, but were only colored glass. When he was asked how this could go undetected for so many years, Mr. Hassan answered, “We were blinded by the gold. One just assumes that real gold and real gems go hand-in-hand. This is a case where they don’t” (“Our Daily Bread,” Fall, 1978).

God blesses a church where His grace, not legalism, permeates the body.

Not only I, but also many commentators, sense that there was a note of concern behind the Jerusalem church’s sending Barnabas to Antioch. Word had gotten back to Jerusalem, “Have you heard what’s going on in Antioch?” “No, what?” “A bunch of laymen are sharing Christ with the pagans, and they’re all meeting together, Jews and Gentiles, as one church!” Alarms went off! Red lights started flashing! It was one thing when the God-fearing Gentile, Cornelius, had become a Christian through the preaching of the leading apostle, Peter. That stretched the limit. But when raw pagans from a notoriously immoral place like Antioch started coming into the church through the witness of a bunch of laymen, it was time for the mother church to check things out! So they sent Barnabas. Some of the circumcision crowd might have said, “Make sure that Barnabas gets that Antioch situation under control!”

Note what Barnabas saw and how he responded: He saw the grace of God and he rejoiced (11:23). If the apostles had sent a legalistic member of the circumcision party, he might have seen something else and had a very different response. He would have seen Jews and Gentiles eating together (Gal. 2:12), not keeping the ceremonial laws. Instead of rejoicing, he would have been horrified.

But Barnabas was a man who lived by God’s grace, and so he saw the grace of God and rejoiced. No doubt he also saw a lot of imperfection in these new converts. New believers do not drop all of their pagan baggage the day they get saved. A church made up of people from such different backgrounds as those in Antioch was bound to have some irritations and conflicts. But rather than focusing on the imperfections and problems, Barnabas focused on God’s grace in saving these people. Instead of slapping a bunch of Jewish rules on them, he rejoiced at what God was doing, and then began to encourage them to remain true to the Lord.