“Son of Man” is Daniel’s label for one who comes before God to receive authority over the nations (Daniel 7). And now Jesus, the Son of Man, has come. But how does he come? Does he come with an army of angels? Does he come on the clouds of heaven? Does he come with a blaze of glory? No, he comes “eating and drinking.”
The Jews of Jesus’s day would have said the Son of Man will come to vindicate the righteous and defeat God’s enemies. They didn’t expect him to come to seek and save the lost. And they would have said the Son of Man will come in glory and power. They would never have said he would come eating and drinking.
And Luke is not talking about just subsistence eating and drinking. Jesus says: “The Son of Man has come eating and drinking, and you say, ‘Look at him! A glutton and a drunkard, a friend of tax collectors and sinners!’” (7:34). A glutton, of course, is someone who eats too much, and a drunkard is someone who drinks too much. Jesus was seriously into eating and drinking—so much so that his enemies accused him of doing it to excess. Earlier in Luke’s
Gospel the Pharisees and their scribes said to him, “The disciples of John fast often and offer prayers, and so do the disciples of the Pharisees, but yours eat and drink” (5:33). Jesus spent his time eating and drinking—a lot of his time. He was a party animal. His mission strategy was a long meal, stretching into the evening. He did evangelism and discipleship round a table with some grilled fish, a loaf of bread, and a pitcher of wine.
Luke’s Gospel is full of stories of Jesus eating with people:
• In Luke 5 Jesus eats with tax collectors and sinners at the home of Levi.
• In Luke 7 Jesus is anointed at the home of Simon the Pharisee during a meal.
• In Luke 9 Jesus feeds the five thousand.
• In Luke 10 Jesus eats in the home of Martha and Mary.
• In Luke 11 Jesus condemns the Pharisees and teachers of the law at a meal.
• In Luke 14 Jesus is at a meal when he urges people to invite the poor to their meals rather than their friends.
• In Luke 19 Jesus invites himself to dinner with Zacchaeus.
• In Luke 22 we have the account of the Last Supper.
• In Luke 24 the risen Christ has a meal with the two disciples in Emmaus, and then later eats fish with the disciples in Jerusalem.
Robert Karris concludes: “In Luke’s Gospel Jesus is either going to a meal, at a meal, or coming from a meal.” 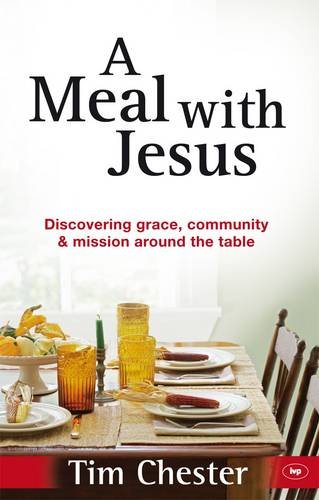 Think about your dining room or kitchen table. What dramas have been played out around this simple piece of furniture? Day by day you’ve chatted with your family, sharing news, telling stories, and poking fun. Values have been imbibed. Guests have been welcomed. People have found a home. Love has blossomed. Perhaps you reached across the table to take the hand of your beloved for the first time. Perhaps you remember important decisions made round the table. Perhaps you were reconciled with another over a meal. Perhaps your family still bonds by laughing at the time you forgot to add sugar to your cake